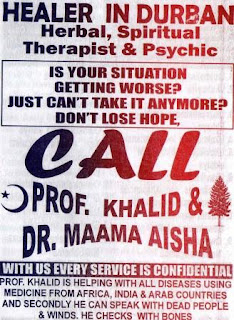 Pictured to the right is a typical advertisement for a witch doctor/spiritualist in the greater Durban area of South Africa. While a large part of the population in Durban is traditionally drawn to this type of occultic evil, most Christians would think of it as a novelty or something that would never directly impact their lives. The noteworthy part about this flyer is that it was being circulated in one of the most conspicuously “Christian” communities in the greater Durban area. The men mentioned here are in business and have apparently found it worth their while to advertise their product in Salt Rock/Ballito.

God help us if we sit idly and let such brazen boasts of the enemy of Christ go unchallenged.

I’m currently challenged by 2 Corinthians 10:3-6 (NASB) which
says,
3 For though we walk in the flesh, we do not war according to
the flesh, 4 for the weapons of our warfare are not of the flesh, but divinely powerful for the destruction of fortresses. 5 We are destroying speculations and every lofty thing raised up against the knowledge of God, and we are taking every thought captive to the obedience of Christ,
6 and we are ready to punish all disobedience, whenever your obedience is complete.

There are two conditions to effectively fighting the “war” every Christian is born into. To begin with we need to ask the Lord to search our own hearts and be sure that our own “obedience is complete.” Then we need to take such boasts to the Lord in prayer and not stop until they are silenced by Him.