How close have you been to an elephant, a hyena or a pride of lions? Is there such a 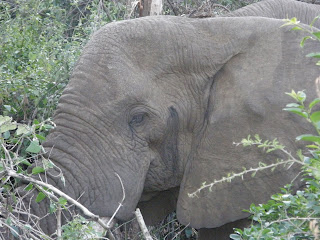 thing as too close? I can tell you this I have been too close. Waking up in the bush camp with a hyena pushing his head in under the edge of the tent flap about two feet from my face was quite exhilarating (frightening). Now I know why all these guys fought over the top bunks. I found out later that chicken bones had been “accidentally” dropped out side our tents.

The camp fire burned until wee hours of the morning providing and atmosphere of openness that was great to see. The many game sightings were truly God sent. I am told it is almost unheard of to see the amount of game as close up as we did this weekend. Everyone had a great weekend and I do not thing one man left there untouched by the Lord.