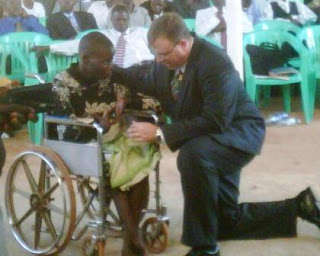 Rodney praying for the poor and oppressed in Kampala Uganda

Psalms 23:5 (NASB)
5 You prepare a table before me in the presence of my enemies; You have anointed my head with oil; My cup overflows.

Earlier this month we met a team from Texas in Kampala, Uganda for a Pastor’s conference and preaching ministry to many in the city. It couldn’t have gone better with many people saved, healed and delivered. This happened in the midst of a terrorist attack by muslim exstremists only four miles from where we were. While there were a number of people hurt and killed in the attacks, our estimates put the number touched by the Lord at ten times as much! 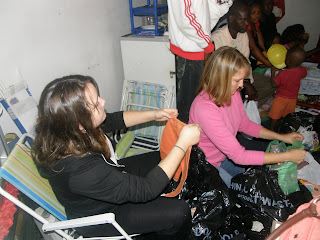 Bridget and Trina passing out toys and clothes to children
We’ve also just finished a toy and clothes distribution in the eTete area near our home in South Africa.It was awesome to see the presence of the Lord all around Bridget and Trina during the event. There was a lot of drunkeness and potential distraction during the work, but there was no noticeable effect and the children were so happy!
As I’ve considered these events in prayer I believe that there is a message not only to us but to Christians everywhere. If we will surrender to the Lord, He will use our lives to confront the despair and hopelessness that is so prevalent in the world. Christ’s Love and power will literally be a “table before me (us) in the presence of my (our) enemies.”
Blessings in Christ Jesus…………………………..Rodney, Trina, Bridget